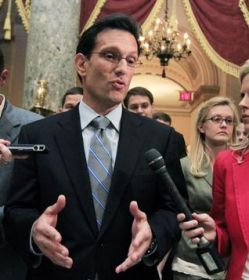 The House of Representatives voted to raise the debt ceiling, only a day before the August 2 deadline for averting a default on the federal government’s debt obligations.

The vote Monday evening saw the measure approved by a 269-161 margin, with 95 Democrats voting for the bill and 95 voting against it. Sixty-six Republicans also rejected the bill, including many Tea Party freshmen, but 174 voted in favor. Rep. Gabrielle Giffords, D-Ariz., returned to the Capitol for the first time since she was shot in the head in January to cast a vote in favor of the bill and was greeted effusively by her fellow lawmakers. The Senate is expected to vote on the bill at noon on Tuesday.

The bill would give the Treasury Department the ability to borrow an additional $400 billion immediately, allowing it to avoid a default on interest payments on Treasury bonds. Payments will also go out on time for Social Security and veterans’ benefits, Medicare, unemployment insurance and other expenses.

The bill would raise the $14.3 trillion debt ceiling in several increments, getting it past the November elections. The initial infusion of $400 billion will be followed by another $500 billion in the fall, unless two-thirds of both chambers reject it. A “super committee” made up of lawmakers from both parties will meet to approve up to $1.5 billion more in borrowing authority, balanced by spending cuts and possible tax reforms. However, Republicans are not expected to go along with any tax increases that aren’t “revenue neutral.” The committee’s recommendations will then go to Congress for an up or down vote in November. If the recommendations are rejected, the bill would set up a trigger to force deep cuts in spending, including defense.

“Tonight’s vote marks a victory for our economy and the American people,” said House Ways and Means Committee Chairman Dave Camp, R-Mich., in a statement. “The legislation not only cuts spending and reforms how Washington manages its budget, it also prevents default on our financial obligations. Importantly, the package does not increase taxes, which is critical to making sure job creators have the resources they need to invest and hire more workers. Finally, the legislation establishes the clearest path yet to a balanced budget amendment—something I have long supported and that is long overdue.”

However, many Democrats and Republicans remained unhappy with the package, including House Minority Leader Nancy Pelosi, D-Calif., who nevertheless voted for the package.

Rep. Emanuel Cleaver, D-Mo., the chairman of the Congressional Black Caucus, called it a “sugar-coated Satan sandwich” on MSNBC because it would deeply cut spending on social programs for the poor without any tax increases on the wealthy or corporations. Pelosi agreed, telling ABC News that it was a “Satan sandwich with Satan fries on the side.” However, she voted for the package to avoid a first-ever default by the U.S. government and the broader impact it would have on the economy.

On the right, Tea Party members were also unhappy with raising the debt ceiling at all. “Throughout this process, the President has failed to lead and failed to provide a plan,” said Rep. Michele Bachmann, R-Minn., the leader of the Tea Party Caucus, according to The Guardian. “The ‘deal’ he announced spends too much and doesn’t cut enough. Someone has to say no. I will.”