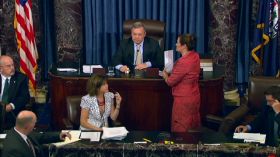 The Senate approved a debt limit increase on Tuesday, narrowly averting an unprecedented default on the federal government’s debt obligations.

The vote, which came on the same day the Treasury Department had predicted the government ran the risk of default, enabled the measure to pass by a 74-26 margin. The House voted to approve the bill on Monday evening by a 296-61 margin. President Obama quickly signed the bill into law.

The bill would raise the $14.3 trillion debt ceiling in several increments, getting it past the November elections. The initial infusion of $400 billion will be followed by another $500 billion in the fall, unless two-thirds of both chambers reject it. A “super committee” made up of lawmakers fr om both parties will meet to approve up to $1.5 trillion more in borrowing authority, balanced by spending cuts and possible tax reforms.

“This creates a new template for raising the debt limit,” said Senate Minority Leader Mitch McConnell, R-Ken. “Never again will a President from either party be able to raise the debt ceiling without being accountable to the other party and without engaging in the debate as we have been able to do. We will be back at it, probably in the early part of 2013, to reduce the size and scope of government and reduce our spending. This isn’t something to dread. This is a debate that Washington needed to have.”

McConnell emphasized the agreement would avoid tax increases and force Washington to solve the budget deficit through spending cuts. However, Senate Majority Leader Harry Reid, D-Nev., noted that the super committee would have to deal with both spending cuts and tax reforms, or else the deal would be subject to a trigger mechanism that would force deep cuts in defense and other areas of federal spending.

“I recognize we have to do more,” said Reid. “Of course we have to do more. That’s why we have the new committee. The vast majority of the American people do not like the [lack of] new revenue. … It’s really unfair for billionaires and multi-millionaires to not be contributing to the arrangement. The Republicans held firm on no new revenue. The members of the committee must have open minds. We’ve had too much talk this morning in the Senate saying there will be no new revenue. Otherwise the trigger will kick in. The only way we will arrive [at an agreement] we will be equal spending cuts, and there has to be some revenue that matches that.”

Obama said that changes in the Tax Code would be needed to balance the budget. "Since you can’t close the deficit with just spending cuts, we’ll need a balanced approach wh ere everything is on the table," he said. "Yes, that means making some adjustments to protect health care programs like Medicare so they’re there for future generations. It also means reforming our Tax Code so that the wealthiest Americans and biggest corporations pay their fair share. And it means getting rid of taxpayer subsidies to oil and gas companies, and tax loopholes that help billionaires pay a lower tax rate than teachers and nurses."

CCH has issued a special Tax Briefing on the new law, which is known as the Budget Control Act of 2011, as the super committee's recommendations may ultimately involve tax changes.

“What this new committee recommends could substantially change the Tax Code,” said CCH principal tax analyst Mark Luscombe. “A lot of attention has focused on raising taxes for high earners and there will no doubt be much debate over tax rate changes, deductions and whether the Bush-era tax cuts will be phased out at the end of 2012 as scheduled.”