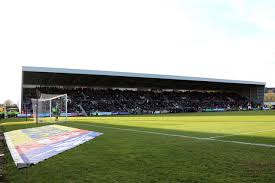 A property developer who received millions of council cash to redevelop the sixfields stadium home to Northampton town football club, has now been banned from running any kind of company for 10 years, after an investigation found out that it was not possible to trace down the nature of the transactions involving payments of more than £5.6m made to a number of parties by the dealer.

A property dealer with the name of Howard Grossman was the only director of the company 1ST Land Ltd, which was formed in 2013 to redevelop Northampton Town’s football stadium.

From December 2013 to July 2014, the company received around £6m from the club towards the redevelopment costs of the football stadium. The club in turn received the funds from Northampton Council.

At the start of 2015, the company went into administration after a petition was filed by a creditor before it went into creditors voluntarily liquidation in the month of December 2015.

Due to the amount of money involved, Insolvency service in cooperation with the police started investigating matters leading to the demise of the company while also investigating the conduct of its sole director Howard Grossman.

The investigation revealed that the property dealer indeed failed in ensuring that company maintained proper accounting documents/ records or provided the administrators with sufficient appropriate accounting records. As a result, it was not possible to trace the exact nature of the transactions involving payments of around £5.6m made to different parties from the company’s accounts.

Grossman has signed a ten-year disqualification undertaking which now has been accepted by the secretary of state. Grossman did not dispute that his company failed in ensuring proper maintenance of accounting records and delivery of such accounting records to the joint administrators.

Chief investigator for the Insolvency Service, Sue MacLeod, said that Grossman, like all other directors of other companies, had specific duties to fulfil as the director of IST Land but he completely disregarded them.

The insufficiencies of the company with regards to maintaining and keeping accounting records mean that it is not possible to determine the nature of payments worth millions, the money which came from the tax-payers hard earned money, who together with the club’s supporters are the real victims here.
The Insolvency Service has secured a ban of 10 years for Grossman and if the disqualification is breached by him then he may face the risk of being serving jail time.

Police of Northamptonshire is continuing their investigation into the missing Council loan money and is also working with other authorities to recover the public funds.