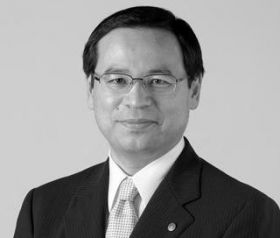 Recently, the conditions surrounding Asia have been evolving, particularly in the areas of economics and finance.

First, allow me to outline economic trends which are changing on a global scale. Along with the economic development occurring in China and India since 1990, the Asian economy has achieved rapid growth.

Though it has experienced periods of temporary stagnation due to the Asian currency crisis in the late 90's and the financial crisis which arose from the US in 2008, Asia has enjoyed V-shaped recovery.

Additionally, despite a slight slowing of growth due to the effects of events such as European financial issues and monetary tightening in developing countries, growth has been steadily expanding thanks to increased trade in goods related to expanded consumption.