Lagarde: We are in Dangerous New Phase 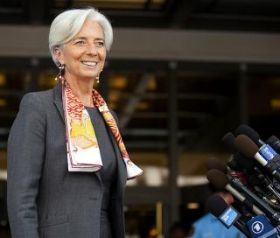 The world is entering a "dangerous new phase" of the economic crisis with political dysfunction having exacerbated the situation, according to International Monetary Fund managing director Christine Lagarde.

In her first major speech in Washington DC as IMF head, Lagarde said that exactly three years after the collapse of Lehman Brothers the "economic skies" look "troubled and turbulent" as global growth slows and downside risks increase.

The former French finance minister stressed that without collective resolve, confidence would not return and that the IMF's role is to shine the light on core economic problems, as well as to turn up the heat when necessary.

There are three distinct problems in the global economy at present, according to Lagarde, who listed them as balance sheet pressures sapping growth, instability in the core of the global economic system and social tensions.

Talking about the first issue, Lagarde said the vicious cycle of weak growth and debt is gaining momentum and that it has been exacerbated by "policy indecision and political dysfunction".