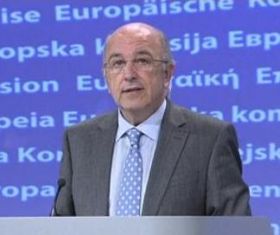 Joaquín Almunia told a press conference on Tuesday that "things have changed" in the financial markets since the stress test results were unveiled in July, meaning that banks could now need extra capital.

The remarks follow reports that a document prepared by EU officials for a European finance ministers meeting said the stress tests conducted by the European Banking Authority used outdated assumptions.

Almunia said: "The worsening of the sovereign debt crisis, its impact on a fragile banking system and the continuing tensions in funding markets all point to the possible need for a further recapitalisation of banks, on top of the nine banks that failed the stress tests earlier this year."

The IMF has since claimed that EU banks could need to be recapitalised to the tune of around €200bn ($274bn).

In his press conference, Almunia also said he will ask that rules allowing state aid for banks, put through in 2008, be extended beyond the end of the year. The measures were first extended in 2009.

He said: "I would have preferred to have gone back to normal rules sooner, and this was indeed my intention before this summer. But the situation we are facing calls for an extension of the existing crisis regime for banks."