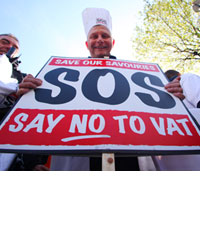 Hundreds of British bakers are marching to Downing Street on Thursday to show their opposition to the unpopular ‘pasty tax’.

Some 300 pasty manufacturers from all over the UK are taking part in the demo to object to chancellor George Osborne's attempt to impose 20% VAT on hot takeaway snacks sold at above ambient air temperature, including items currently zero rated, such as sausage rolls and pasties.

Organised by high street bakery Greggs and the National Association of Master Bakers, representatives from the baking industry and Cornish MPs will present a petition containing 500,000 signatures to 10 Downing Street. Ken McMeikan, chief executive of Greggs, said: ‘Customers and bakers are livid about this proposed tax.

I cannot think of a worse time for the government to consider forcing ordinary, hard-working people to pay 20% more for popular, everyday food, especially with the news yesterday that the country is now officially in a double dip recession.

‘This is the wrong tax at completely the wrong time. The government has lost touch with the realities of how tough life is for UK consumers, high streets and bakers. If they haven't lost touch, they will ensure this proposed change does not go ahead.’

A Labour-backed bid to topple the ‘pasty tax’ last week was defeated despite a revolt by 14 coalition backbenchers – nine Tories and five Liberal Democrats.

The government is currently in the midst of a consultation period over the new ‘pasty tax’ which ends on 18 May, with the proposed change due to take effect from 1 October 2012.

Back in the 1980’s – another Conservative chancellor – Nigel Lawson – father of TV’s Nigella, introduced VAT on all hot food, but, still-warm freshly baked products, such as pastries and pies, were exempt.