US Considers 'Modified Incorporation' of IFRS 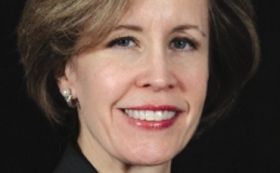 US STANDARD SETTERS are calling for "modified incorporation" of global accounting standards, after national regulator the SEC said it needed more time to decide on convergence.

Financial Accounting Standards Board chairman Leslie Seidman (pictured) said international standard setters should be responsible for writing the rules used by US companies, but the name US GAAP should not change due to practical considerations.

Under her vision, the FASB would gather input and research, while refraining fr om working on standards being tackled by the IASB.

"In order to ultimately endorse a standard for your country or region, you have to have been an active participant in these processes yourself," Seidman continued.

Her speech came one day after SEC chief accountant James Kroeker warned the regulator will miss its deadline to decide on IFRS by the end of the year.

The accountancy heavyweights were addressing the American Institute of CPAs conference and Hans Hoogervorst, chairman of the IASB, also commented on the contentious process.

Hoogervorst again underlined the benefits of globally comparable standards, tempering this with a nod to the "challenges and significant pressures facing the SEC in making its decision".

Hoogervorst and Seidman alike acknowledged the original aim of complete convergence of IFRS and US GAAP is increasingly remote.

Seidman said while joint work should continue on priority projects such as revenue recognition, "we do not believe indefinite convergence is a viable option, politically or practically. As any observer can see, this process is challenging technically and administratively."

Hoogervorst said: "Our convergence history with FASB has been extremely useful in getting us to a point wh ere IFRS and US GAAP are much improved and closer together," but warned strongly against accepting this status quo and allowing national variations on IFRS, known as carve-outs.

Both standard setters made reference to future institutional arrangements. One possibility is that national bodies will be more engaged, a suggestion from the US Financial Accounting Federation that has received widespread support.

Assuring the US of the IASB's continued commitment, Hoogervorst concluded: "There should be a clear timeline for the completion of the initial ‘endorsement process'. There should also be a presumption that - given full due process and extensive involvement of the national standard-setter - non-endorsement would be very rare indeed. Once the initial process of endorsement is completed, US companies should be able to assert compliance with both US GAAP and IFRS."