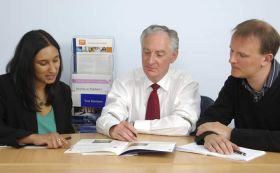 Speaking at an SEC panel focusing on investor views of international financial-reporting standards, the representatives roundly supported the goal of establishing a single set of high-quality global financial-reporting standards in the United States in the form of IFRS. But they suggested that the IASB, the current promulgator of IFRS, lacks the backbone and outreach capability of FASB — qualities that would be needed for a global system to succeed.

While the establishment of high-quality uniform standards should be a goal, achieving that goal "with due process and without undue political pressure" may be more important, said David Larsen, a managing director at Duff & Phelps, an investment-banking firm. Noting that FASB has withstood such pressure in the past, he said there is "some doubt about IASB" in that regard. (Larsen is an adviser to FASB's Valuation Resource Group on valuation-related standards.)

For his part, Kevin Spataro, a senior vice president at Allstate, said that while the insurer, a big institutional investor, could accept IFRS as a single global standard, the IASB would need to focus on achieving better outreach to investors and other groups — the kind of "formal continuous feedback from all constituents" that FASB has established.

The issue of a possible diminishment of FASB's role if the United States decides to go to a more international system arose recently in the wake of a May 26 SEC staff paper that looked at a possible framework for IFRS adoption. The paper described a "condorsement" (combining the words convergence and endorsement) model for IFRS. During a transition period, FASB would continue to hold sway in this country over a convergence of U.S. GAAP and IFRS. But once that melding has been achieved, FASB would merely endorse the standards the IASB has developed. "Most significantly, the FASB would participate in the process for developing IFRS, rather than serving as the principal body responsible for developing new accounting standards or modifying existing standards under U.S. GAAP," said the staff paper.

Incorporating the metaphor of putting "bumper guards on a bowling alley," Larsen suggested that such curbs would be needed if IFRS is incorporated. That's because it is famously a "principles-based" system offering wide latitude for interpretation. To maintain some level of consistency in such a system, "a strong and vibrant FASB" would be needed, he said.

Calling himself a "fan of the condorsement idea," Gregory Jonas, a managing director at Morgan Stanley, said that nevertheless he prefers a gradual adoption of international standards that "hedges against risk of IFRS failure."

Like other panelists, Jonas suggested that one risk in changing from U.S. GAAP to IFRS is the jettisoning of specific accounting standards in favor of principles requiring too much interpretation. "We need to be careful about jumping on the principle-only [bandwagon]," he said.

In fact, some advocates of a principles-based approach led by the IASB have pushed for a minimum of guidance from the board in order to force financial-statement users to come up with their own interpretations, said Gerry White, president of Grace & White, an investment-advisory firm.

To counter the lack of specificity and uniformity that might result from an overreliance on interpretation, investors need a strong regulatory infrastructure such as the one currently in operation in the United States, said White, who also chairs the Corporate Disclosure Policy Council of the CFA Institute. In that respect, a government body might be a better interpreter "than auditors meeting in private," he said.