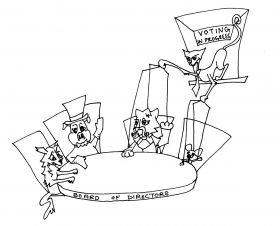 The IASB, International Accounting Standards Board, has just released their “ED 2013/10 Equity Method in Separate Financial Statements (Proposed amendments to IAS 27)”. The amendments which have been proposed will introduce an option in the accounting which would allow an entity, in a separate financial statement, to then account for their investments in joint ventures, associates and subsidiaries by using the equity method.

These amendments will re-introduce the option of accounting that existed previously before the 2003 version of IAS 27 Consolidated and Separate Financial Statements. The proposal for the new amendments comes as a result of the responses made to the 2011 IAB Agenda Consultation. This will particularly affect those constituents within a jurisdiction where an entity's interests, be they joint ventures, associates or subsidiaries, have to by law be accounted for. This has to be done by the equity method in separate financial statements, which have to be prepared by law.

As it currently stands, constituents within these jurisdictions have to prepare 2 separate sets of financial statements;

- In accordance with the local laws; interests in joint ventures, associates and subsidiaries are all accounted for by way of the equity method.

Oftentimes, the only real difference between the 2 separate sets of financial statements is the way the entities interests in joint ventures, associates and subsidiaries are treated. The proposal, if it is finalized, will see the amendments applied in a retrospective manner with early application allowed. No date for it to come into effect has yet been proposed. Comments have to be made to the IASB by February 3rd 2014.