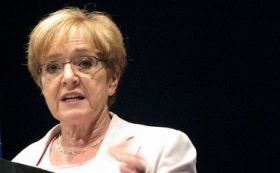 THE FIRST audited government accounts have been qualified by the Comptroller and Auditor General, for its exclusion of government-controlled bodies.

Comptroller and auditor general Amyas Morse does not believe the financial statements, released today, give an accurate picture of liabilities and assets.

The accounts exclude bodies controlled by the government such as nationalised banks, the Bank of England and Network Rail. He believes these should be included to comply with International Financial Reporting Standards.

"I am particularly concerned that large organisations which in my view are clearly owned and controlled by the government, have been excluded," said Morse.

Margaret Hodge, (pictured) chair of the Public Accounts Committee, said: "We do not yet have a complete picture of what the UK public sector owns and what it owes."

The National Audit Office also highlighted other limitations such as the financial information presented is more than 20 months old.

"It also gives limited analysis of spending across the main functions of government, such as defence and education, or on services such as consultancy, which would make the account more useful to the reader," said Morse.

Although he believes the government accounts is landmark event which has increased transparency and accountability, he adds it needs to be "significantly" improved.