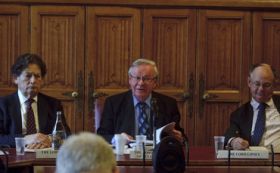 A FORMER chancellor of the exchequer in the House of Lords has urged the European Commission to strengthen proposed legislation aimed at reforming the region's auditing industry.

Lord Lawson(pictured left) said on Tuesday he was "very surprised" proposals by Brussels did not accept a "statutory obligation for regulators and bank auditors" to share concerns with each other, the Financial Times reported.

As chancellor more than two decades ago, Lord Lawson introduced legislation to enable bank auditors to share information with regulators in private. He now wants to ensure this interaction takes place, and said "few" discussions were conducted in the run-up to the 2008 financial crisis.

His remarks came as Jonathan Faull, director-general for internal market and services at the Commission, answered questions from the Lords economic affairs committee (pictured).

"The nature of dialogue between regulator and auditor should be left to their discretion," said Faull, without ruling out the possibility that proposals may be altered as they are debated by the European parliament and Council.

The Lords committee called for a broad investigation of competition in the UK audit market last year with the aim of reducing the Big Four's dominace.

John Griffith-Jones, joint chairman of KPMG Europe, said the Big Four accounting firms would like to have discussions with the Commission about how to improve the stability of the financial system and improve the quality of audits.

The Commission's proposals to reform the Europen audit market, inlcuding forcing big accounting firms to split their audit and consulting businesses, have been opposed by the large firms.

Griffith-Jones said there was a danger many of the Commission's planned changes to audit rules could damage audit quality.

"The capability of firms to provide quality audits will be diminished if auditors are separated from wide-ranging advisory expertise including, crucially, risk management in the financial sector," he said.

Faull also revealed he expects new legislation on audit guidelines to be implemented at the end of this year or very early next.