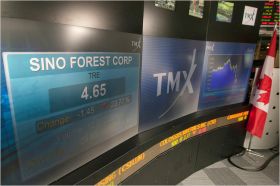 On one side is an assessment of a company with a clean audit opinion fr om the Toronto office of Ernst & Young, and with bonds rated just below investment grade by Standard & Poor’s and Moody’s. It has raised billions in capital markets.

On the other is an investment research firm using the name Muddy Waters Research. It says the company, the Sino-Forest Corporation, is a fraud, and that its shares are worthless.

As this is written, there is no definitive answer as to who is right. But the initial reaction of the markets seemed to be that they had more trust in the short-seller — a company whose Web site gives no address — than in the auditor’s opinion.

The shares, traded in Toronto, lost more than 70 percent of their value in two days, shaving $3 billion off its valuation. Bond prices also plunged. Prices had to fall sharply before speculators could be found who were willing to bet that the financial statements really did, in the boilerplate words of the auditor’s letter, “present fairly, in all material respects, the financial position of Sino-Forest Corporation.”

If there was a fraud, there is no doubt that Ernst & Young will be sued, and there is even less doubt that it will deny responsibility. After all, its letter did make clear that management was responsible for the internal controls needed to assure the statements are “free from material misstatement, whether due to fraud or error.”

To the auditing industry, the fact that investors tend to blame auditors when frauds go undetected reflects unrealistic expectations, not bad work by the auditors. The rules say auditors are supposed to have a “healthy degree of skepticism,” but not to detect all frauds.

“There is a significant expectations gap between what various stakeholders believe auditors do or should do in detecting fraud, and what audit networks are actually capable of doing, at the prices that companies or investors are willing to pay for audits,” stated a position paper issued in 2006 by the chief executives of the six largest audit networks.

Note that last part. They suggested that if investors were really worried about fraud, they should consider paying more for a forensic audit that would have a better — but not guaranteed — chance of spotting fraud. Don’t like our work? Pay us more.

There is no doubt that some companies are easier to audit than others, and that Sino-Forest falls on the harder side. While it has headquarters in Toronto and Hong Kong, its operations are — or at least are claimed to be — spread out over much of China. The company says it manages nearly two million acres in forest plantations across China. Muddy Waters says that is a lie, and that its actual operations are much smaller.

Investors trying to decide whether to believe the Muddy Waters report, with its detailed assertion that the company’s claims are contradicted by Chinese records, would love to know just what Ernst did to check. What records did it inspect? Which tree plantations did it visit? Who did the work? Was it people from Ernst’s Toronto office, which signed the report, or people from a Chinese affiliate? How many auditors did the work, over what period of time?

Ernst’s audit opinion does not say, which is no surprise. Virtually every audit opinion in the world says almost the same thing, with no details about the company being audited. Auditors are paid millions of dollars to produce a report that no one thinks is worth reading.

On June 21, the Public Company Accounting Oversight Board, which regulates auditors in the United States, plans to ask for public comments on whether to require auditors to do more and say more.

One idea the board is expected to consider is requiring auditors to disclose more about what they did, and did not, do. Ideally, auditors would point to things that they could not audit. There are a lot of them now, and sometimes they are crucial.

“The foundation” of the Sino-Forest fraud, stated the Muddy Waters report, “is its convoluted structure wh ereby it runs much of its revenues through ‘authorized intermediaries.’ ” Those organizations supposedly process tax payments owed to China on wood production, the report said, thereby assuring the company “leaves its auditors far less of a paper trail.”

If an audit was expected to call attention to possibly critical information that was not available to the auditors, perhaps there might be pressure from investors on companies to make that information available. In any case, investors could better understand what the auditors knew — and did not know — in reaching their conclusions.

The problems with audits now go well beyond questions of fraud. A critical element for many banks is the valuation of securities that trade infrequently, if at all. There may be a wide range of possible estimates, and the auditor now must simply conclude the estimates are within that range. If so, it signs off.

To make things worse, the estimates may have come not from the company being audited, whose work the auditor can examine, but from a pricing service that views its models as proprietary, making them virtually impossible to audit. That fact is something investors should know, but now do not.

Nor do auditors disclose information about how reasonable an estimate is. In some cases, a wide range might be defensible, and investors have no way to know whether a company was particularly conservative or aggressive in its estimates. The oversight board may consider asking that companies disclose what they deem to be the range of reasonable estimates, and why they chose the one they did. Then the auditors could comment on that.

If auditors enforced some consistency on ranges, then financial statements of different companies might be more comparable, even though they chose different estimates.

The accounting oversight board is also expected to ask if it is time to end the “one grade fits all” audit model, in which every company is deemed to “fairly” present its results. Perhaps a second grade could be added, like “presents adequately,” for companies that push the envelope but do not violate the rules.

In addition, auditors could be called upon to discuss the risks the company was taking. They could also be asked to call attention to some of the most critical disclosures in the footnotes, something that French auditors already do.

If much of that happened, audit opinions could become a lot more interesting to read. Investors might actually learn something, and they might be able to form opinions about differences in audit firms.

Another long-overdue change would be to have the lead partner on an audit sign the opinion in the annual report. Now, the firm signs, and investors have no way of knowing who was responsible. If an audit signed by a certain partner later blew up, that could be devastating to his or her career if investors shied away from any companies whose audits he later signed. Would that make auditors more careful? Perhaps.

This week, as the controversy over Sino-Forest raged, Canadian regulators began an investigation and the company indignantly defended itself. “I have spent 17 years building Sino-Forest and I can promise investors we are not guilty of the charges levied against us,” said Allen Chan, the chairman. “Our financial statements have been audited by Ernst & Young a leading international audit firm....”

Its board appointed a special committee of three directors, all Canadians who served on the company’s audit committee and including a former Ernst partner, to investigate. The committee hired PricewaterhouseCoopers, another member of the Big Four.

Investors seemed confused. After the plunge of last week, the shares bounced around on extremely heavy volume this week. They rose a bit on Thursday to 5.15 Canadian dollars ($5.26), but were still down 72 percent from the price of 18.21 Canadian dollars just before the charges were aired last week.

Moody’s said it will review its ratings and “seek to assess the veracity of the claims” made by Muddy Waters. It gave details of what it would check.

But Ernst was mute, unwilling to either defend its work or discuss how it had reached its now-questioned conclusion that the financial statements “present fairly” the company’s condition. Investors who relied on the audit will just have to wait.

“It would be inappropriate to make any comment while the work of the special committee is ongoing,” said Amanda Olliver, a spokeswoman for the audit firm in Toronto. “In any event,” she added, “our professional obligations prevent us from speaking about client matters.”