Claims of CC Dismissed by the Big Four 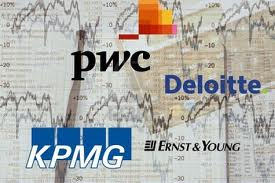 However, all the reports of the Competition Commission regarding the failing of auditor to serve the needs of their shareholders due to their focus on fulfilling management interest are dismissed by the Big Four.

The reports of the Competition Commission regarding dominance of the Big Four, uneven distribution of incentives among management and shareholders and the overpaying of the companies for audit of lower quality have been regarded as baseless by the Big Four.

Head of reputation and public policy at PwC, Richard Sexton said that they focus highly on the shareholders and that the report of the CC does not look into the important role that they play in looking after the interests of their shareholders.

The chairman and senior partner of KPMG, Simon Collins has said that he does not agree with the report of the CC and added that “audit objectivity and appropriate levels of sceptisicm” are the things which they do. He has also said that in UK, both the quality and the level of competition are quite high.

The Competition Commission claims that since there is no competition, the prices are higher, the quality is not up to the mark and there is limited innovation for the companies. That is why; they have proposed to change the situation by extending reporting requirements and making more frequent reviews. They have also proposed to increase independence and accountability by offering shareholders and audit committee more control regarding the external audit.

But these claims have been vehemently dismissed by David Barnes, the UK head of public policy and partner of Deloitte. He also said that there is no evidence that the audit market situation is such as reported by the CC.

The same sentiment is also echoed by Hywel Ball, head of assurance at Ernst and Young. He said that they primarily focus on the shareholders and the audit quality and therefore does not agree with the report of CC.