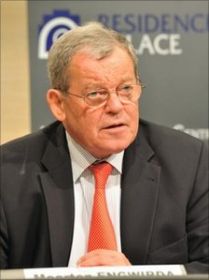 A long-standing Dutch ex-member of the EU Court of Auditors, Maarten Engwirda, has spoken of a "culture of cover-up" and of reports being watered down.

Mr Engwirda has said that in some cases the court's reports were being "sabotaged". He said he was so fed up he decided to write a book about it.

The auditors' role is to check that the EU's 126.5bn euro (£105bn) funds are properly collected and legally spent.

"Maybe a third of my colleagues had a special interest in the criticism of their country and in some cases tried to water down that criticism," he said.

Mr Engwirda who has just left the post of Dutch auditor after 15 years said that when the EU grew in 2004 from 15 members to 25 the problem was already on the wane.

But he also suggested that there was pressure from the EU's anti-fraud commissioner at the time, Siim Kallas, to "relax its standards".

Mr Kallas is now Vice President of the commission and his spokeswoman, Helen Kearns, told the BBC News website that while that may have been Mr Engwirda's analysis "that's not how Mr Kallas recalls the work in that period".

"Very significant progress was made in that period towards positive statements of assurance," Ms Kearns said.

The Court of Auditors has refused to give the EU's spending a clean bill of health for 16 years running.

Mr Engwirda has said he intends to publish a book about his experiences in the coming months.