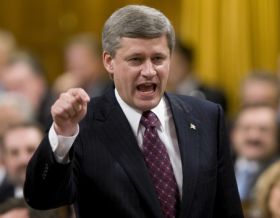 Admitting its incapability to downsize the federal deficit by 2014, the Harper government has defended the $19.8-million contract, equivalent to $90,000 a day, with consulting firm Deloitte to advise on cost-cutting measures.

“It isn’t good, quite frankly, for a government to just look at itself. There’s a lot of expertise in Canada on the subject of public-sector productivity, for example, and we look forward to having the advice of, in this case, Deloitte‘s,” Finance Minister Jim Flaherty said.

Flaherty will then include the final plan in his next budget. The actual cuts will come into force by April 1.

Cost-cutting is especially urgent this time when all federal departments will have to come up with a budget plan that is five to 10 percent less than their total budgets. Treasury Board President Tony Clement will lead a cabinet committee which will review the proposals come fall, with the results being expected for a release on 2012.

The transfer payments to individuals and the provinces will not be affected according to Clement.

But hiring Deloitte and paying the firm $90,000 a day is “wasteful and unnecessary” according to NDP finance critic Peggy Nash, saying the “government likes to pretend that they’re prudent in terms of economic spending but this massive contract to an outside source to tell them to chop thousands of public sector jobs is.”

On the other hand, Industry Minister Christian Paradis called the Deloitte contract “normal,” saying “there will be major decisions to be taken and we need an expert from the private sector to do it properly.”

Deloitte was hired on August 15 to advise the federal cabinet and senior officials on finding enough savings to balance the books by 2014. The Public Works invited a group of 20 “pre-qualified” firms, including Ernst & Young, IBM Canada, Bell Canada and Accenture Inc., on July 11 to a public bidding, rather than use a fully open tendering process.

The government has already paid PriceWaterhouseCoopers a $2.5-million fee for advice on how to reduce 308 data centres to nearly 20.

The contract will run until March 31, and will provide senior and elected officials on public- and private-sector with best practices in improving productivity and achieving operational efficiencies. The government’s cost-cutting plan is a year-long exercise announced in the March 22, which will trim $4 billion from $80 billion in annual program spending.

Deloitte has already provided training programs for officials, as well as management tools to help the committee review the spending-cut plans.

The contract also calls for advice on consolidating the government’s far-flung data centers, which is the focus of the cost-cutting exercise.

Deloitte will also provide an information specialist to advise on “disposing of information,” and “co-ordinating Access to Information and Privacy Act requirements.”

It will also be “responsible for the efficient and systematic control of the creation, receipt, maintenance, use and disposition of records.”

But New Democrat Jean Crowder declined the government’s reasoning, saying Canadians will not buy its justification for spending $90,000 a day for an outside consultant to plan cuts.”

“A day’s pay for this consultant is more than a year’s pay for front-line Service Canada workers. While Conservatives throw money away on high-priced consultants, they are forcing Canadians to accept cuts to the programs and services that they rely on,” Crowder said.