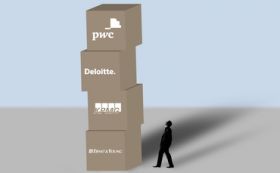 Headline measures such as splitting the provision of audit and non-audit services, capping non-audit fees and mandatory joint audit have been billed as game-changing, but analysis of the numbers shows their immediate impact is ambiguous.

Prohibiting non-audit service provision by the largest firms is the most eye-poppingly radical proposal, but the threshold set by Brussels might merely inhibit further growth, rather than prune the Big Four in their current form.

The threshold stands at one-third of annual audit revenues from large public-interest entities, above which firms would be barred from providing non-audit services, or belonging to a network which does so.

Currently, total audit fees from FTSE 250 companies - the vast majority of which are audited by the Big Four - are around £800m per year, according to Hemscott data. Given that about 25% of large corporates' operations are outside the European Union, and therefore would be unaffected by Barnier's plans, this takes the total audit fee to approximately £600m.

The Big Four's combined income for UK audits in the 2010 financial year was £1.7bn. Divided between them, the £600m income from large PIEs accounts for less than one-third of total audit revenue, meaning they could yet dodge the Barnier bullet.

Of course, there are other factors to consider. Number-one firm PwC enjoys significantly more audit revenue than Ernst & Young - £548m against £303m - so they might have more to fear than smaller peers.

On the other hand, the one-third proviso means the Big Four audit activity could continue to grow, so long as non-audit services expand fast enough to contribute more than two-thirds of income.

Assuming Barnier's team have checked their numbers meticulously, this means the widely reported possible outcome - splitting the Big Four - might not come to pass, and was never the intention.

BDO audit partner James Roberts agreed the measures might not have the immediate impact many stakeholders assumed, but said the market shape could still change in the long term if the one-third rule becomes reality.

"It opens a door the Big Four don't want opened", he mused, saying: "On the face of it, the measures look sensible."

The non-audit services fee cap might have a more dramatic impact on the landscape. Hemscott data shows non-audit service fees paid to auditors by FTSE 250 companies stand at around £320m. Allowing for the approximately 25% performed outside the EU, the figure is closer to £240m, of which 10% of the largest PIE audit income - or £60m - auditors are allowed to retain, according to current proposals.

This gives us a figure of between £150m - £200m of non-audit fees up for grabs, which might have a greater impact than the more eye-catching one-third threshold that has been the focus of much debate.

Joint audit proposals could also have wider implications than stakeholders have assumed. In an effort to ensure mid-tier firms benefit, Barnier has stipulated at least one of the pair must have commanded 15% or less of total PIE audit fees in the previous year.

Any firm with a share greater than 15% would be the 'major' partner. In practice, this should mean no Big Four firm can buddy up with another, helping mid-tier players to gain valuable income and experience.

However, Ernst & Young currently holds just 16% of large PIE audits, barely into the major firm bracket. If it were to shed a proportion of these through acting as the major partner in a joint audit, it could conceivably dip below the 15% threshold, meaning it would also qualify as a smaller partner for Deloitte, PwC or KPMG.

PwC, on the other hand, boasts a 41% share of the FTSE 100 market, suggesting the risks to the Big Four are far from equal.

Barnier's stipulation that no two Big Four firms share a joint audit unless there are objective grounds to do so throws more uncertainty into the mix - what are these grounds, and who decides them?

Whatever the proposal means for the quartet, many mid-tier firms view it favourably. The European Group of International Accounting Networks and Associations, whose members include PKF, Grant Thornton and Baker Tilly, called it "the most certain way of reducing [market] concentration" in the medium term.

The argument that joint audits cost more, which includes concerns from the influential but reclusive Hundred Group of Finance directors, might also be losing traction, with some stakeholders arguing vehemently that even Barnier's estimate of a 10% premium is overstating matters.

Preliminary conclusions of a cross-border university study, Is joint audit bad or good? Efficiency perspective evidence from three European countries, "strongly suggest that joint audit does not imply an increase in fees". However, it also found no positive impact on audit quality.

Instead, the authors said the debate around joint audit should focus not on efficiency, but on the risk to financial markets in case of an audit failure involving one of the Big Four firms.

Taken together, these factors call for deeper examination of the Barnier proposals their impact can be assessed. High stakes have jolted stakeholders into a speedy reaction, but the true impact of audit reform might live up to neither hopes nor fears.