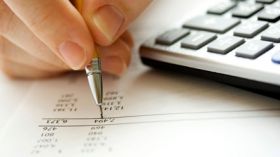 In the previous article, we looked at the efforts of the IASB to use a socialist bent mentality to unite all accounting standards together under one umbrella. They are doing this through the newly published, ED/2013/5 “Regulatory Deferral Accounts” section of their larger group of standards. Let’s look at what it means. First what is a deferral account in accounting standards? It is an account in either the assets or liabilities side of the balance sheet where the value in the account is deferred to a later date.

Previous GAAP regulations allowed these values to be deferred to later dates because of the nature of these accounts. For example, there are intangible assets (assets with no real monetary value) that nonetheless represent something ‘like’ a monetary value for the company. Goodwill is one such account that increases the value of the assets column by an assessed amount based solely on a company’s positive reputation or name recognition. Another example is deferred debt or ‘contingencies’. If for example there is an active lawsuit against the company but a judgment has not been rendered, the ‘contingency’ would represent a possible liability in the future the company would have to pay.

This new standard permits the company to continue to use the previous GAAP accounting policies to recognize deferral account balances. But it requires that the company present any of these deferral account balances as separate line items in the statement of financial position and as separate line items in the profit and loss statement. This may artificially make the company appear stronger or weaker than it is in actuality depending on the individual circumstances.

This ED/2013/5 also requires that the companies in those nations that haven’t adopted the IFRS’s yet to adopt the whole of IFRS. Other major changes to the accounting standards of this interim measure include Income taxes, Impairment of Assets and Non-Current Assets Held for Sale and Discontinued Operations. As of right now, these amounts are included in the balance sheet to account for those assets that are still in the company’s possession, but no longer working. Disposal of assets prior to the depreciation schedule could result in negative tax effects on the company. When these items are removed from the asset column, it could mean a more negative financial statement that could impact the decision of investors to risk their money investing in the company.