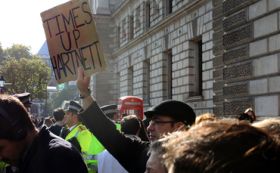 A PROTEST GROUP has launched formal legal proceedings in an attempt to reverse the deal that let Goldman Sachs off paying interest payments on its tax bill.

UK Uncut Legal Action logged an application for a judicial review at the administrative court in London today. The group has claimed that HM Revenue & Customs had not been forthcoming in giving details to the Public Accounts Committee.

HMRC has admitted that there was an error in the agreement that meant the investment bank did not have to pay interest payments. The National Audit Office has estimated that the error lost the Exchequer £5m-£8m, but a whistleblower who worked in the HMRC legal department estimated the error at £20m.

"We feel it is now undeniably in the public interest that this judicial review goes ahead in order to reverse the alleged decision by HMRC to let Goldman Sachs off up to £20m in tax and reclaim this money for the UK taxpayer," a statement from UK Uncut Legal Action said.

Legal firm Leigh Day & Co are taking on the case on a "no win, no fee" basis. Leigh Day & Co's Richard Stein said: "We wrote to the HMRC in October asking them to quash the deal and reclaim the millions unpaid in taxes from one of the world's richest banks but received no response. We chased again in November and they claimed they needed more time."