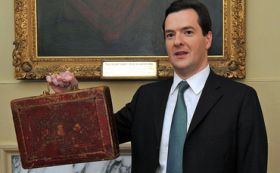 THE TAKE-UP of the National Insurance Holiday scheme that formed a key part of Chancellor George Osborne's first Budget is still way below the Treasury's initial estimates, the government has confirmed.

Exchequer secretary to the Treasury David Gauke released figures about the scheme to Parliament last week. Just over 10,000 companies have taken up the scheme since June 2010. The government had hoped for a take-up of 132,000 a year when it was announced by Osborne (pictured).

The holiday exempts qualifying new businesses in eligible regions from up to £5,000 of employer national insurance contributions for each of the first ten employees hired in the first 12 months of business.

It has received criticism because it is only available in certain regions. Professionals have called for the scheme to be rolled out across the country.

HM Revenue & Customs sent around 140,000 personalised letters to all businesses that have registered for a PAYE scheme since June 2010 at a cost of around £90,000 in October.