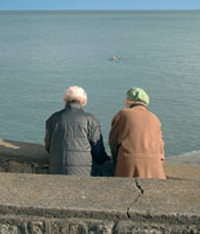 Millions of UK employees, not enrolled in a defined benefit scheme and who – from October 2012 – will automatically be signed up to a Defined Contribution (DC) pension fund are facing a pension funding crisis.

That’s the stark message from the Pension’s Corporation, the risk manager for defined benefit pension funds.

It has calculated that a ‘typical’ 35 year old joining a DC pension fund today may have to contribute more than 10 times the annual contributions of his colleague in a Defined Benefit (DB) pension fund to build an equivalent pension at retirement.

That would equate to a yearly contribution of 55% of gross salary for the DC member (a contribution of £14,000 for someone on average earnings in 2011), compared to the average 5.1% annual contribution rate saved by the DB pension fund member.

After 30 years at these accrual rates, combined with employer contributions, the DB scheme member could have built up an index-linked pension promise of 50% of final pay (or £13,000 a year for someone retiring in 2011 on national average earnings).

Someone with a DC pension, however, would need a pot of approximately 17 times their final pay (£440,000 in 2011 for someone retiring with national average earnings) to secure this level of pension at March’s annuity rates.

David Collinson, co-head of business origination at Pension Corporation, said: ‘If you are a Warren Buffet-type figure and can generate huge returns year in, year out, then that’s fine. But most can’t. To go it alone is hard.’

He recommends anyone not fortunate enough to be a DB pension fund member to try and ensure that their pension fund charges are ‘fair and reasonable - substantially less than 1%’ and understand the consequences of saving at a certain level. ‘If you are paying 10% of your salary into a pension each year, you’ll probably have to work well into your 70’s,’ he added.

In practice, at current average contribution rates of 8.9% in total, the DC scheme member might end up with a total pension pot of just 2.7 times earnings after 30 years, equating to a £2,100 annual pension. A DC equivalent would be £25,874.