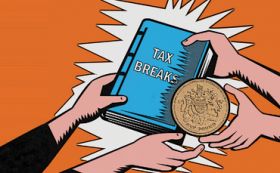 NINE OUT OF TEN charity executives believe the government's cap on tax relief will discourage donations from major donors, according to a survey published today.

Osborne is introducing the measure in order to prevent the wealthiest mitigating the amount of income tax they pay by taking advantage of tax relief on charitable donations.

The Charities Aid Foundation surveyed 120 charity chief executives and senior executives revealed 88% have serious concerns over the effect the chancellor's decision to cap tax relief will have, with 78% calling on the government to reverse the move.

Charity executives also expressed fears about the potential impact on their own charities' income, with half of those expecting a reduction in income predicting their major donations would fall by at least 20 per cent.

More than 2,200 charities and individuals have signed up to support the campaign against the tax, 'Give it Back, George'.

John Low, chief executive of the Charities Aid Foundation, said: "This survey shows the widespread alarm and despair among charities at the government's decision to cap tax relief on donations.

"There are fears across the charity world that donations will be hit, which means the vital work that charities do will be damaged at a time when demand is high and public spending cuts make the charity safety net even more important than ever."