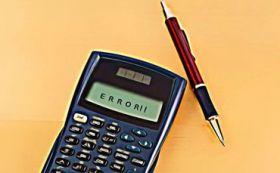 AN ACCOUNTING blunder at fashion retailer SuperGroup has been blamed for contributing to a profit warning that saw shares plummeting at the Superdry owner.

Outgoing finance director Chris Howe, who steps down from the board on 23 April, discovered "arithmetic errors" which led to a £2.5m shortfall in its wholesale business.

A routine audit last week revealed a series of forecasting and accounting errors. The most basic error was the insertion of a 'plus' rather than a 'minus' into the company accounts, which contributed to its third profit warning since October.

SuperGroup also admitted to a further £2m shortfall in the same division because of demand for its stock coming later than expected. An additional £2m shortfall was caused by more goods being bought through discount retailers.

In an unusual statement, SuperGroup said: The wholesale business is multi-dimensional, experiencing high growth levels and, given our rapid expansion and lack of history, it is difficult to predict accurately."

As a result of the errors, annual pre-tax profit will be about £43m in the year to April 2012, compared with a forecast of about £51m.

The company declined to comment on whether Howe will remain at the company. It was previously announced that on being replaced by Shaun Wills as CFO, Howe would remain with the group.