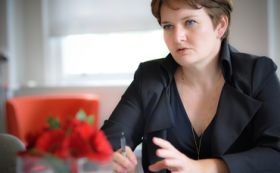 ACCA'S CHIEF executive Helen Brand has been awarded the Officer of the British Empire (OBE) in the Queen's Official Birthday Honours list.

Brand has held the position since September 2008 and is also a member of the Prince of Wales' Accounting for Sustainability Supervisory Board, which focuses on helping organisations boost their integrated reporting.


"I truly believe that this honour is in recognition of ACCA's success, of which I am extremely proud to have played a part, alongside its members, students and its staff around the world," she said.