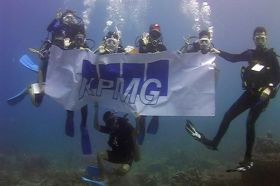 KPMG International’s latest Global M&A Predictor shows that forward price/earnings (PE) ratios have risen by 12 percent over the last year, indicating an increased appetite for making deals. However, these figures are tempered by a fall over the last six months. A cause for optimism is the growing M&A capacity, as evidenced by the downward trend in net debt/EBITDA ratios, projected to fall by 26 percent by June 2012. These lower debt levels should put prospective corporate buyers in a stronger position to fund any potentially attractive deals.

On a sector basis, healthcare and utilities both show a growing appetite. Healthcare has the added advantage of having low leverage, so it would be no surprise to see companies in this industry on the acquisition trail. Conversely, utilities is the single most indebted sector, with any new acquisitions likely to be funded by new equity or the disposal of existing assets.

Telecommunications has almost held its own over the past six months and is well up over 12 months so continued activity can be expected, with Consumer Staples just behind. Energy and Basic Materials have both progressed well over 12 months but have each pulled back over six months as caution about the commodity cycle has increased. Nevertheless, the race for limited global resources should mean continued deals in this space.

The Consumer Discretionary (non-essential consumer goods), Industrials and Technology sectors have shown the lowest increases in confidence over the last 12-month period.

As David Simpson, Head of Global M&A at KPMG and a partner in the UK firm, comments: “The decline in M&A appetite over the first half of 2012 may well prove to be just temporary. It’s also interesting to observe that total deal values have risen over the year while the volume of transactions is currently declining. This suggests that major cash-rich buyers are prepared to spend, while their smaller counterparts are playing more of a waiting game, fearful of making commitments in an uncertain economic climate.”

And despite the dip in the volume of deals, he also feels there is good news on the supply side: “The availability of deals is set to increase as previously frustrated sellers recognize that the market is open for business – even if it’s not quite as hot as they would like. Banks and PE houses, for instance, may be looking to dispose of unwanted assets in order to move forward – which could mean some favorable prices. Everyone loves a bargain so this should help the market along. If this leads to a rise in activity, then confidence could resume its climb.”