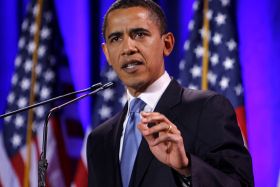 President Barack Obama and Speaker of the House John Boehner, R-Ohio, made the case for their rival approaches to controlling the nation’s spiraling budget deficit as the clock ticks down to the August 2 deadline for raising the debt ceiling to avoid an unprecedented default on the national debt.

Obama backs a plan that Senate Majority Leader Harry Reid, D-Nev., plans to introduce in the Senate this week, while Boehner intends to introduce a Republican-backed plan in the House.

During prime-time televised speeches Monday night, they laid out their approaches to averting a default on the government's debt obligations. Reid’s plan, drawn up after consultations with Senate Minority Leader Mitch McConnell, R-Ken., and House Minority Leader Nancy Pelosi, D-Calif., would lift the $14.3 trillion debt ceiling by $2.7 trillion, which would give the federal government enough running room until after the 2012 elections. The plan relies only on spending cuts, but no tax increases or entitlement reforms.

Obama indicated during his speech that he still believes taxes should be raised on millionaires and billionaires, hedge fund managers, and corporate jet owners, and to close corporate loopholes on major oil companies, after the economy improves. He said Boehner had originally agreed to a “balanced approach” mixing tax and revenue increases with spending cuts. Boehner, however, walked out of negotiations last Friday, saying that Obama had asked for an additional $400 billion in revenue increases on top of the $800 billion that had been under discussion. Obama emphasized the need to raise the debt ceiling in time to avert a default, even if it only involves spending cuts, but said he preferred to combine spending cuts with tax increases.

“The only reason this balanced approach isn’t on its way to becoming law right now is because a significant number of Republicans in Congress are insisting on a different approach—a cuts-only approach—an approach that doesn’t ask the wealthiest Americans or biggest corporations to contribute anything at all,” said Obama. “And because nothing is asked of those at the top of the income scale, such an approach would close the deficit only with more severe cuts to programs we all care about—cuts that place a greater burden on working families. So the debate right now isn’t about whether we need to make tough choices. Democrats and Republicans agree on the amount of deficit reduction we need. The debate is about how it should be done. Most Americans, regardless of political party, don’t understand how we can ask a senior citizen to pay more for her Medicare before we ask a corporate jet owner or the oil companies to give up tax breaks that other companies don’t get. How can we ask a student to pay more for college before we ask hedge fund managers to stop paying taxes at a lower rate than their secretaries? How can we slash funding for education and clean energy before we ask people like me to give up tax breaks we don’t need and didn’t ask for?”

Boehner’s plan would lift the debt ceiling in two increments, with $1.2 trillion in spending cuts initially, and the appointment of a bipartisan congressional commission to propose an additional $1.8 trillion in savings by Thanksgiving.

“The President has often said we need a ‘balanced’ approach—which in Washington means: we spend more, you pay more,” said Boehner. “Having run a small business, I know those tax increases will destroy jobs. The President is adamant that we cannot make fundamental changes to our entitlement programs. As the father of two daughters, I know these programs won’t be there for them and their kids unless significant action is taken now. The sad truth is that the President wanted a blank check six months ago, and he wants a blank check today. That is just not going to happen. Because there is no stalemate in Congress. The House has passed a bill to raise the debt limit with bipartisan support. And this week, while the Senate is struggling to pass a bill filled with phony accounting and Washington gimmicks, we will pass another bill—one that was developed with the support of the bipartisan leadership of the U.S. Senate. I expect that bill can and will pass the Senate, and be sent to the President for his signature. If the President signs it, the ‘crisis’ atmosphere he has created will simply disappear. The debt limit will be raised. Spending will be cut by more than one trillion dollars, and a serious, bipartisan committee of the Congress will begin the hard but necessary work of dealing with the tough challenges our nation faces.”

Obama said he does not want to have to fight another battle over the debt ceiling in another six months, during an election year, but he may be forced to sign a temporary increase in order to beat the debt clock.