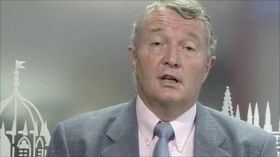 The chairman of HM Revenue & Customs has apologised for the treatment of taxpayers after the service was attacked by a committee of MPs.

Mike Clasper said: "We are not happy with our performance in 2010."The Treasury sel ect committee said dissatisfaction risked undermining public confidence in the tax system.The worst problems were in getting tax offices to answer phone calls at peak times and "endemic" delays in replying to letters.

Mr Clasper told BBC Radio 5 live: "It simply wasn't good enough on post and telephone and I'd like to take the opportunity to apologise to the people who had to take a long time to get through, or we didn't get back to them quick enough with the post."HMRC says it has recruited 1,000 extra contact centre advisers to handle calls during "exceptionally busy periods".

The MPs report blamed bad management, demoralised staff, excessive job cuts, and increasingly complex tax laws for the poor level of service it had discovered."The evidence we have received in this inquiry has been disturbing," the MPs said."HMRC's delivery of services to the general public has fallen to unacceptable levels in several areas."There is considerable dissatisfaction among the public and tax professionals with the service provided by the department," the MPs added.

Mr Clasper said: "In 2011 we've been working very very hard to improve things. We're handling the calls immediately much more frequently than we did in 2010 and as far as individual customers are concerned you know the post levels have dropped in half."That's not where we want to be but it's a lot better than where we were in 2010."

Frank Haskew, of the Institute of Chartered Accountants of England and Wales (ICAEW), doubted that the situation would improve."Given the necessity to reduce the current 70,000 staff by a further 10,000, we are not convinced that HMRC have the resources or the capability to deliver on improving service standards," he said.

This concern about the future was echoed by the MPs. They said that the HMRC did a good job in collecting taxes.But they were worried that the quality of service for taxpayers could become even worse.

- excessive reliance on the internet for filing tax returns, or giving information, to the disadvantage of those without good internet connections

- the possibility that further job and spending cuts could undermine the department's ability to do its job properly.

- the use of 0845 phone numbers by HMRC for customer queries. The committee suggested that cheaper 0345 numbers are used.

"We are concerned that HMRC's performance will continue to deteriorate if further reductions in resources are badly managed," the MPs said.

"There was near unanimity among our witnesses that the reductions made so far have had a damaging impact."Other tax advisers agreed with this diagnosis.

Chas Roy-Chowdhury of the Association of Chartered Certified Accountants (ACCA) warned: "If reduced funding leaves HMRC unable to address the basics of maintaining a service for compliant taxpayers, the potential damage to the economy and reputation of the United Kingdom is immense."

Robin Williamson, of the Low Incomes Tax Reform Group (LITRG), said: "If HMRC want to improve taxpayer compliance and reduce error levels, they need to make it easier for people to contact them and get advice that is prompt, accurate and understandable.