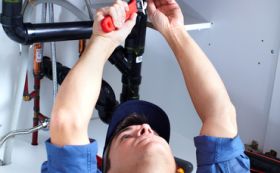 FIVE PEOPLE have been arrested as part of HM Revenue & Customs crackdown on plumbers who are failing to pay their taxes.

John Pointing, assistant director of HMRC criminal investigations, said this was the culmination of months of work by HMRC. "We provided a chance for those we have arrested, and the 600 we are investigating, to come forward voluntarily and put things right," he said. "These arrests send a clear message that HMRC will take action against those who choose not to come forward and pay the tax they owe."

Mike Wells, director of HMRC's risk and intelligence service, said: "These arrests are just the start. HMRC is considering hundreds of further cases for criminal investigation in the plumbing and medical professions. Some people may have thought we were bluffing when we said we have information that we will use to prosecute tax evasion."