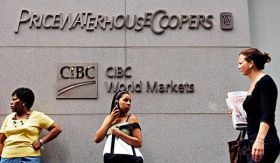 Accounting firm PricewaterhouseCoopers is now facing a discrimination suit filed by a former employee of the Big Four auditing firm, on claims that he was fired three years ago because of his religion and of his critical remarks on the firm’s diversity practices.

Issam Azziz, 38, an Arab-American of Moroccan descent living in Citrus Park, filed the lawsuit in the U.S. District Court. PricewaterhouseCoopers on January similarly faced discrimination suit filed by Dunstan Pedropillai, 47, a Sri Lankan who has been working as a partner at the firm for 25 years  on a £933,480 annual salary, for slashing his pay allegedly on grounds of racial discrimination.

“I am suing so no one else will have to feel this pain.”

Azziz, who was near to becoming a partner from being a senior audit manager, said he was fired after responding to the 2009 newsletter interview that “there is room for improvement” in the company’s diversity practices.

He added that PricewaterhouseCoopers declined his recommendation for a Muslim woman who qualified for a job.

According to the discrimination suit, the comments were not included in the newsletter. Three days later, he received a “performance note” from his superiors criticizing how he allegedly treated his subordinates.

Azziz was fired despite job evaluations describing his performance as “laudatory” and a 2004 company recognition granting him the “Great Performance Award.”

Shibly and Ahmed Bedier, a civil rights and community activist, accompanied Azziz and his attorney, Peter Helwig, at a news conference called outside the court after the lawsuit was filed.

Azziz is seeking reinstatement, back pay and compensation for emotional distress and humiliation.

He said PricewaterhouseCoopers went on as far as hounding him even on the job he landed outside the accounting firm and subsequently getting him fired from it.

The company “retaliated against (Azziz) in reprisal for his opposition to (PwC’s) racial discrimination against persons who are Muslim or of Arab ethnicity,” the suit stated.

“They not only mistreated me because of my faith,” he said.

“They’ve gone out of their way to destroy my life.”

Attorney Caroline Nolan for PricewaterhouseCoopers denied the allegations, saying the “claims have no merit and PwC intends to defend this case vigorously.”