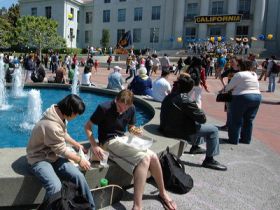 With billions of dollars cut fr om education budgets across the country, students are confronting some major changes as they return to school this year. Schools have been facing cuts for the past several years, but federal stimulus dollars softened the blow. Now, the federal money is dried up. Increasingly, school leaders at both the K-12 level as well as at public colleges and universities are unable to shield students fr om feeling the impact of budget cuts in the classrooms and in their daily lives. Here are five ways students will feel budget cuts this school year:

The most obvious thing many students will notice is that their class sizes are larger. According to a national survey of school superintendents by the American Association of School Administrators, more than 100,000 public school teachers have been laid off for the school year that is about to begin in some states and has already begun in others. In many school districts, having fewer teachers means packing more students into each classroom. High school students in Huntsville, Alabama, found classes packed with 40 to 50 students when they returned to school earlier this month, the Huntsville Times reports, after the state lost more than 1,000 teachers this year due to cuts.

Teacher staffing problems are creating other issues, as well. High schools in Manchester, New Hampshire, are eliminating some elective courses in the English department — cuts are still being finalized — and have had to turn some students away in the sciences, even fr om required classes. There’s a shortage of science teachers, partly as a result of budget cuts, and the state caps lab classes at 24 students, so cramming more students in the room is not an option. “Students may not get everything they asked for,” says district Superintendent Thomas Brennan.

The district’s three high schools will have to prioritize. They plan to focus first on making sure that juniors and seniors are able to fulfill requirements to graduate on time. Younger students might have to wait an extra semester or two to get into certain classes. The district is asking some teachers to take on additional classes and encouraging others to work toward certification in subjects where schools are short. “We’re trying to come up with any approach that we can to ensure that we have our core courses,” Brennan says.

Fewer majors to choose from

Incoming students at public colleges in states such as Missouri, Arizona and North Carolina might notice some changes to the course catalog this year. Dozens of majors were eliminated in those states, after legislators asked colleges to identify low-producing majors and programs, based on criteria such as enrollment and availability in other colleges in the state. In most cases, students who are already enrolled will be allowed to complete their major, but incoming students won’t be allowed to enroll in programs that have gotten the ax.

A wide variety of majors are on their way out. At North Carolina Agricultural and Technical State University, a 14 percent budget cut last year led the administration to terminate French and Spanish majors. At Arizona State University, wh ere the state has cut funding by $110 million over the past three years, students and faculty in the professional golf management program found out late last spring that their academic track would be eliminated.

The roughly 200 students already in the program — one of only 20 in the country accredited by the Professional Golfers Association — will be allowed to finish out their degrees. But incoming students were told in late April that the program would no longer exist when they arrived on campus. Given the specialized nature of the degree they were seeking, most of those students will likely have to transfer elsewhere. “Kids came to ASU for the PGM program,” says Curt Hudek, the golf program’s former director. “They didn’t come to ASU and then decide to do PGM.”

Attempts to save money on school busing will mean that more students will have to do more walking to get to school this year. In Elgin, Illinois, busing isn’t going away — state law requires the district to provide the service for all students who live more than 1.5 miles from school. But high schoolers now will have to get themselves to the nearest elementary or middle school to catch the bus. According to the school district’s spokesman, Tony Sanders, the new policy will reduce the number of stops buses have to make from about 1,800 to 300. He says this will save $750,000 this year on gas, maintenance and other costs. By next year, Sanders says, the district anticipates reducing its staff of drivers, mostly through attrition.

Some 17 drivers have already been eliminated in Colorado’s Falcon School District, which includes parts of Colorado Springs. But the loss of familiar faces isn’t the biggest change on board the bus. This year, students are being charged $1 for each ride, with their trips tracked by a swipe card they use to get on the bus.

District spokeswoman Stephanie Meredith says the new fee is intended to shield students from feeling the brunt of budget cuts in the classroom. Over the past few years, the central office staff has been cut in half and the district has outsourced the majority of its information technology work. This year, the district’s $92 million budget was reduced by more than 10 percent, the third straight year of cuts. Meredith says she tries to explain this context to parents who have complained about the transportation changes. “If we had to cut teachers or this service, it was a no-brainer,” she says. “When you explain that to parents, they understand it.”

For years, cutbacks in state funding for higher ed have been driving up tuition at public universities. But this year will be exceptional. As Stateline has reported, students at Pennsylvania’s 14 state-owned universities are in for a 7.5 percent tuition hike this fall. Students in Louisiana, Tennessee and Nevada are in for double-digit increases; in Washington State, tuition will go up by 20 percent.

In California, wh ere big tuition hikes have been the norm for a few years, students can thank their non-resident classmates for staving off even larger increases. State support for the University of Californian system is now $1 billion less than it was four years ago. Part of that gap is being filled by out-of-state and international students — who pay nearly $23,000 more than their in-state peers.

In the past two years, the number of out-of-state and international undergraduate students committing to UC schools has doubled. The increase has been particularly dramatic at the system’s flagship Berkeley campus, wh ere non-resident students will account for nearly 30 percent of the incoming freshman class, according to preliminary figures. That’s three times the percentage of non-California residents who entered in 2009. While flagship schools in states such as Michigan and Virginia have regularly admitted many non-resident students, the change at Berkeley represents a major shift for California. That shift has occurred without dramatic increases to the overall size of Berkeley’s freshman classes, so the number of incoming in-state students has declined by more than 1,000 in the past two years. “If the funding were there,” says UC spokesman Ricardo Vazquez, “we would take more California residents.”

In Carlisle, Pennsylvania, students at two local schools will be greeted this fall by something unusual on the grounds: sheep. Rather than spend money on cutting grass, the Carlisle School District has brought in 7 Romney sheep to tend the fields. “They’ve done a good job so far,” says Superintendent John Friend.

The sheep come free of charge, since they belong to the principal of the middle school. Friend estimates that they will save the district about $15,000 this year in mowing costs. That makes up for only a small amount of the district’s $2 million reduction in state support following what has been described as Pennsylvania’s deepest education budget cuts in a generation.

The 6.2-acre field in which Carlisle’s sheep do their work is unusual for another reason: It is home to solar panels that churn out one megawatt of energy. Bringing in solar panels last year required an investment of $5 million — half of which was paid for with state and federal grants. Friend thinks that investment will soon pay for itself between savings on energy costs and solar renewable energy credits earned from use of the panels that can be resold to utility companies.

Response to both moves has been mostly positive so far among parents. Friend thinks they send a message to the community that the district cares about sustainability and is doing everything possible to reduce its costs. But the superintendent admits that there was some confusion when the sheep first appeared. “There were some people who called the principals,” Friend says. “They thought that someone was playing a prank.”