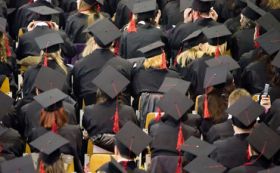 Hattie Hodgson, a member of the SCM's general council, said: "The government has opened the door to a potential privatisation of higher education by squeezing the number of public places, hiking up fees and allowing corporations - some of them with questionable ethics - to gain undue influence over education".

BAE was also on the receiving end of criticism when it emerged representatives sit on the board of curriculum committees at Loughborough University, where the arms manufacturer sponsors engineering and management courses.

PwC sponsors 100 university places, while KPMG is putting 75 students through a four-year BSc degree in accounting plus two years working at the Big Four firm on a starting salary of around £20,000.

Oliver Tant, UK head of audit at KPMG, said: "We need an accountancy profession that is as diverse and as open as it can be. This scheme will address current concerns around how students can meet the costs of university, and make degrees and professional qualifications available to a broader socio-economic group."

David Willetts, minister for universities and science, welcomed the corporate scheme, saying: "It's the kind of initiative we hope will flourish as we reform higher education."