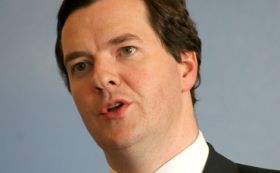 THE 50p TOP rate of tax will raise an additional £12.6bn over five years, according to the Treasury's own figures.

The figures were calculated in November 2010 and were revealed following a parliamentary question by Lord Ashcroft.

Chancellor George Osborne (pictured) has previously claimed that the tax rate was a temporary measure. However, he has indicated a final decision will be made following a review by HM Revenue & Customs to be completed after the self-assessment deadline in January 2012.

A letter to the Financial Times from 20 leading economists, published yesterday, called on the government to scrap the top rate of tax, claiming it was harming economic growth.