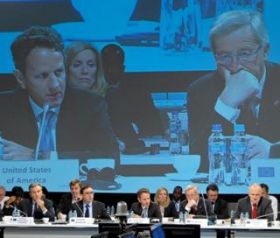 Eurozone finance ministers have hinted that they will back a proposal to introduce a financial transaction tax in the bloc despite opposition from the UK and US.

During a weekend meeting of EU finance ministers, France, Germany and Austria were among those to say they would progress with plans to introduce the tax in the eurozone if agreement can't be reached on an EU-wide levy.

This is despite the fact that the proposal was rejected by both US Treasury secretary Tim Geithner and UK chancellor George Osborne over the weekend.

Chairing the meeting, Polish finance minister Jacek Rostowski said there are "very considerable divisions" within the camp. The move marks the eurozone's first indication that it is willing to go it alone on the landmark measure.

European authorities believe that the FTT - which could levy around a 0.05 per cent tax on the trading of shares, bonds, foreign exchange and derivatives - would raise billions of euros without negatively affecting trading. Belgian finance minister Didier Reynders confirmed that negotiations would continue on a full European FTT.

Speaking after the meeting on Saturday, he said: "I must confess it is not so evident we'll meet agreement in Europe about that.

"If it is not possible, we will maybe discuss [an FTT] on the eurozone."

German finance minister Wolfgang Schaeuble also refused to give up hope of non-eurozone countries, such as the UK and Sweden, joining in with the measure.

He added: "If I say right away that we're going to do it in the euro area, then we don't stand a chance [of it being adopted across the EU]."

In an unprecedented move, Geithner joined the meeting as US unease at the state of the EU economy deepens.

But the American came under fire from Austria's finance minister Maria Fekter after he vehemently opposed the EU's plan to introduce the tax.

While the meeting remained split on the introduction of an FTT, little progress was made in solving the Greek crisis that threatens to engulf Europe.

Instead, ministers announced that they would delay the payment of the next €8bn ($10.9bn) tranche of the country's bailout loan.