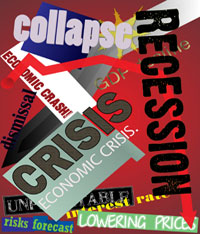 The Bank of England’s recent round of quantitative easing is unlikely to boost the UK economy with key drivers for growth stagnant and companies unwilling to spend, according to the latest forecast by the Ernst & Young ITEM Club.

The gloomy report downgrades the Club’s forecast for GDP growth this year to 0.9% from the 1.4% estimated just three months ago and predicts unemployment reaching close to three million over the next six months.

‘It’s worse than we thought. The bright spots in our forecast three months ago - business investment and exports - have dimmed to a flicker as uncertainty around Greece and the stability of the Eurozone increase,’ said Peter Spencer, the Club’s chief economic advisor

He called for the government and the Bank of England to introduce urgent new monetary and fiscal measures to stimulate growth such as cutting stamp duty and further lowering of interest rates.

‘With the UK recovery grinding to a halt, new measures are now needed to help stimulate growth. We think there is scope for targeted tax reliefs and spending measures to help put us back on track. In the meantime, businesses need to be much more aware of the economic risks and have contingency plans in place given the current volatility,’ he said.

He added that, without a swift resolution to the Eurozone debt crisis, the forecast for the UK economy could worsen.

‘We have based our figures on the assumption of an early resolution of the crisis gripping the Eurozone, which may prove optimistic in view of the very slow progress made until now. In that case, the outlook for the UK would inevitably be a lot worse,’ he said.