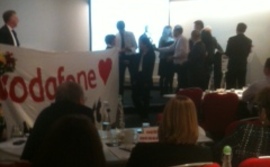 PROTESTORS FR OM UK Uncut invaded a conference wh Dave Hartnett was speaking to 'thank' him on behalf of Goldman Sachs and Vodafone.

The protestors, dressed as executives, entered the LexisNexis Tax Journal conference in the City of London, while the HM Revenue & Customs permanent secretary for tax was speaking. They handed him bottles of champagne and flowers, saying "we love you Dave" and started singing "for he's a jolly good fellow, and so say Goldman Sachs".

UK Uncut protestors (pictured at the event, above) were then ushered out of the America Square Conference Centre.

Hartnett has appeared before the Public Accounts committee to explain why the Exchequer lost up to £10m when agreeing a deal with Goldman Sachs.

University College London student Katie Clarke said: "Dave Hartnett signed off Vodafone's £6bn tax dodge. That money could have prevented not just the cuts to higher education, but all of the cuts in public services over the past year. If Hartnett had a shred of self-respect he'd resign immediately."

An HMRC insider told Accountancy Age: "It wasn't so much a storming of the stage, as a light rain. Dave has no problem with peaceful protest so long as it is well informed and this wasn't."

Chris Jones, director of tax markets at LexisNexis, said: "The UK Uncut protest at the Tax Journal Conference was good natured and done in a spirit of fun. Dave Hartnett did not leave the stage and once the protesters had left the room, Dave continued to make his speech outlining how HMRC tackles corporate tax avoidance. It is a pity that the protesters had not asked if they could listen to his speech as they may have found more things to agree with than disagree with."