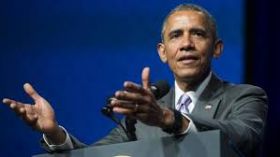 A proposal of 7.7 percent Internal Revenue Service budget cut is put forward by United States House of Republicans, concluding the budget limit for the upcoming months.

President Obama’s claim for an increase of total 18 percent to a total budget of $10.1 billion reserved for the Internal Revenue Service, in order to put a freeze on hiring by the beleaguered agency faced rejection by the Republicans.

The Representative Ander Crenshaw, a Republican of Florida who watches over the IRS budget is of the view that Americans have to go through the daily struggle of making important budget decisions and they want the same for the federal agencies.

Barrack Obama’s IRS budget is looked upon as a main conflict between the two parties who are deciding over the federal budget, due by September 30.

A Kentucky Republican: Senate Majority Leader, Mitch McConnell, commented last week while mentioning the Environmental Protection Agency. He said that without a step up at the EPA and IRS there is an inevitable indication of danger to veto funding asked for the troops and their machinery.

Democrats are of the view that the government gets an estimated $6 on every dollar expended if there is depletion in IRS which cause to lose the government revenue from tax enforcement.

$10.9 billion is the IRS budget for the year coming to end in September 30, which is same as what the agency got in1998 in inflation-adjusted terms

The tax gap is increasing radically due to the depletion of resources to advance in tax frauds. The only solution to this problem appears to be an increase in the total budget.