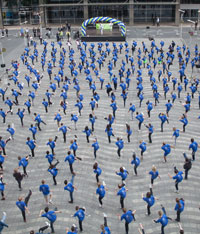 Staff at KPMG can now claim to hold the title of the largest ever synchronised taekwondo routine, as 800 employees across 11 UK locations punched and kicked their way to the record for charity.

The event was in aid of fundraising for Barnados, the children’s charity, for which they have raised over £1m since KPMG employees voted for it as the firm’s chosen charity.

The largest group of synchronised martial arts was at Montgomery Square in London, where in front of Cheryl Baker – of Bucks Fizz and BBC ‘Record Breakers’ fame – as well as Craig Brown and Stephanie Allen of the GB taekwondo team, 330 staff performed the routine simultaneously.

KPMG expect to raise a further £50,000 through the event alone and Diana Tickell, UK director of marketing at Barnardo’s, said: ‘This is a fantastic achievement by KPMG – the money raised will go towards helping the invaluable work we do with thousands of vulnerable children every day.’

Mike Kelly, head of corporate social responsibility at KPMG, said: ‘We had a fantastic response from staff who came out all around the country to set a brand new world record and raise money for an excellent cause.’

Adding: ‘It’s an amazing discipline – most of us were worn out after just a ten minute non-contact routine!.’