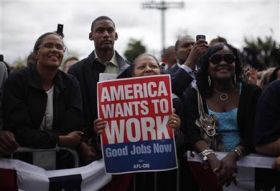 President Barack Obama, facing waning confidence among Americans in his economic stewardship, plans some $300 billion in tax cuts and government spending as part of a job-creating package, U.S. media reported on Tuesday.

The price tag of the proposed package, to be announced by Obama in a nationally televised speech to Congress on Thursday, would be offset by other cuts that the president would outline, CNN reported, citing Democratic sources.

Bloomberg News said the plan would inject more than $300 billion into theeconomy next year through tax cuts, spending on infrastructure, and aid to state and local governments.

Obama would offset those short-term costs by calling on Congress to raise tax revenues in a deficit-cutting proposal he will lay out next week, the news agency reported, without citing sources.

The White House declined to comment on the reports.

Obama's aides have refused to go public with the estimated cost of Obama's package or provide many specifics in advance, except to say that the proposals will have a "quick and positive" impact on boosting jobs at a time of stubbornly high U.S. unemployment.

"We need to do things that will have a direct impact in the short-term to grow the economy and create jobs, and the president will put forward proposals that will do just that," White House spokesman Jay Carney said.

Republicans criticized Obama for not including them in discussions on the package before his big speech and indicated any jobs bills could face tough passage through Congress, where they control the House of Representatives.

"I have no doubt the president will propose many things on Thursday that, when looked at individually, sound pretty good, or that he'll call them all bipartisan. I'm equally certain that, taken as whole, they'll represent more of the same failed approach," said the top Senate Republican, Mitch McConnell.

Republican House leaders separately wrote to Obama urging him to repeal "excessive, job-destroying regulations" and laying out possible areas of common ground, including reforms to the unemployment system and free-trade agreements.

Confidence in Obama's management of the economy has been hit by months of bad economic news, and several polls on Tuesday showed fresh declines in his job approval ratings.

Obama hopes to start reversing this trend with his address to a joint session of Congress on Thursday, in which he will try to convince voters that he has a better economic recovery plan than his Republican opponents.

Bloomberg News said nearly half the stimulus in Obama's plan would come from tax cuts, including an extension of a payroll tax cut paid by workers and a new decrease in the amount paid by employers. Vice President Joe Biden told reporters last month a payroll tax cut for employers was being considered.

Obama fought Republicans for much of the summer to lift the U.S. debt ceiling in a bitter debate that saw rating agency Standard & Poor's cut the U.S. AAA credit rating, and he must now get lawmakers to back additional spending that many oppose.

However, the president is seeking congressional support at a time when his own prospects of re-election have worsened.

An NBC News/Wall Street Journal poll showed Obama's job approval rating at a low of 44 percent, while an ABC News/ Washington Post poll found that six in 10 Americans now rate the president's job on the economy and jobs negatively.

A third survey by Politico and George Washington University found that 72 percent of voters believe the country is either strongly or somewhat headed in the wrong direction, a jump of 12 percent since last May.

Obama must get unemployment down from levels currently above 9 percent to improve his chances of winning a second White House term in the November 2012 election.

The president has already touched on a various steps Congress could take to lift growth and hiring, including infrastructure spending, business tax breaks, and extending the payroll tax cut and aid for the long-term unemployed.