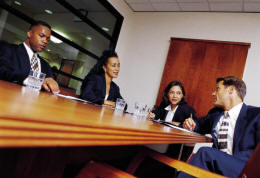 The Human Capital Case Competition is designed to engage MBA students in solving real-world human capital business issues. Additionally, Deloitte surveyed participants to glean insight into their perceptions of the most pressing workforce issues and to better understand the goals, expectations and desires of the next generation of potential leaders.

Conducted by Deloitte earlier this month in anticipation of the competition, a survey of 43 participating students representing the Millennial demographics (ages 16 – 47) revealed 64 percent consider job advancement/promotion as the most important factor when deciding wh to launch or continue their career.

Compensation and benefits (44 percent) and “fun” work environment (33 percent) followed as the second and third most important considerations.

Andrus added: “Direct exposure to these students through this type of competitive recruiting event is invaluable to our organization. This approach to recruiting is a response to the swiftly changing demands of tomorrow’s workforce and we are lucky enough to have brought on a number of great participants from past events to join Deloitte.”

Students also value professional development initiatives to be critical in their first post-graduate job, according to the survey.

Results show that direct project management is valued by nearly half of the respondents as the most important tool for professional development (48 percent).

Nearly 40 percent of respondents revealed direct access to management as the second most important initiative for professional development, while more than three-quarters (77 percent) cited annual goal-setting.

Regarding career advancement and promotions, respondents agree 360 degree evaluations should hold the most weight (36 percent). Moreover, 47 percent agree the second most critical initiative for professional development is direct manager feedback and all respondents agree company/industry standard exams is third most important.