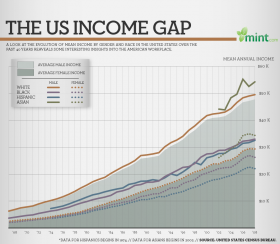 A new report from the Organization for Economic Cooperation and Development finds the gap between rich and poor in OECD countries has reached its highest level in more than 30 years, and the traditionally redistributive effects of progressive income tax systems have become less effective since the mid-1990s.

The report, released Monday by the international organization, found that the income gap has risen even in traditionally egalitarian countries, such as Germany, Denmark and Sweden, from 5 to 1 in the 1980s to 6 to 1 today. The gap is 10 to 1 in Italy, Japan, Korea and the United Kingdom; 14 to 1 in Israel, Turkey and the United States; and more than 25 to 1 in Chile and Mexico.

Tax and benefit systems play a major role in reducing market-driven inequality, but have become less effective at redistributing income since the mid-1990s, the report noted. The main reason lies on the benefits side: benefits levels fell in nearly all OECD countries, eligibility rules were tightened to contain spending on social protection, and transfers to the poorest failed to keep pace with earnings growth.

Public cash transfers, along with income taxes and social security contributions, played a major role in all OECD countries in reducing market-income inequality. Together, they were estimated to reduce inequality among the working-age population. This redistributive effect was larger in the Nordic countries, Belgium and Germany, but well below average in Chile, Iceland, Korea, Switzerland and the United States.

Income taxes and cash benefits play a small role in redistributing income in the United States, reducing inequality by less than a fifth. In a typical OECD country, it is a quarter. Only in Korea, Chile and Switzerland is the effect smaller.

“Despite the substantial gains of high-income earners in some countries, income taxes played a relatively minor role in moderating trends towards higher inequality,” said the report. “The reason is that trends towards lower income taxes, on the one hand, and more progressive taxation, on the other, had opposite effects on redistribution and partly canceled each other out.”