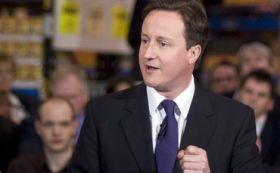 Speaking on the BBC's The Andrew Marr Show, Cameron said the 50p rate of tax on those earning more than £150,000 would continue.

'When you're taking the country through difficult times and difficult decisions, you've got to take the country with you,' said Cameron. 'I think that means permanently trying to make the argument that what you're doing is fair.'

Cameron also suggested that a mansion tax was unlikely in the Budget.