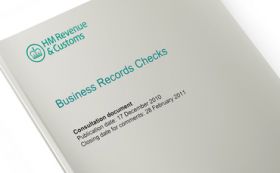 Its initial consultation document in 2010 said: "Tax agents tell us that whilst they advise clients on what records to keep and how to keep them, many do not follow the advice given. This causes additional unnecessary work for those agents who have no way of enforcing the standards that they think necessary."

HMRC said last month that it is reviewing the initiative. However, it is continuing with its target to check 12,000 businesses by April.

Smith added: "Despite reports to the contrary, HMRC has not begun to limit the number of business records checks to ease the burden on SMEs. If anything, the BRC unit in Coleraine has stepped up activity to try and achieve its target of 12000 by the end of this current tax year."

Tina Riches, director, technical at the CIoT said: "This is a little surprising given that HMRC are supposed to be using business record checks to target high risk businesses.

"There will inevitably be suspicions - especially if this is widespread - that HMRC may be using this process for a wider purpose, i.e. that if an agent's records are found to be less than pristine HMRC will target their clients for closer examination."