HMRC Faces up to Advisors' Woes 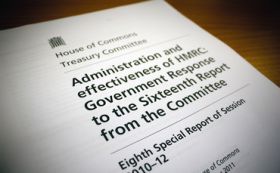 TAX BODIES, charities and businesses have been working with the HMRC to improve its service delivery in a joint initiative that has been well-received by both HMRC and the profession.

The meeting was followed by visits to practitioners' firms by HMRC, and in turn, visits by practitioners to HMRC service centres - for example HMRC's postal centres - in order for each to understand what "the other side" faced.

Paul Aplin, the ICAEW representative, hailed the programme of visits as "the most innovative thing" to come out of the initiative, and was very positive about HMRC visit to his own firm, AC Mole & Sons, wh ere he is a tax partner.

"We had Stephen Banyard visit our firm for a whole day, and he saw pretty much every part of the process of our dealings with HMRC - what was working well and what wasn't working so well - and he was genuinely interested in taking on board what it was like for us," Aplin said. "Talking to other practitioners I heard the same thing - HMRC was genuinely interested in what was going wrong, and seemed keen to do something about it."

There were lessons for tax advisors too, Aplin added, particularly when practitioners visited HMRC's postal centres to experience what HMRC's staff dealt with from the profession. "The people who visited the postal centres were very surprised at the [lack of] quality of letters HMRC received," Aplin said. "Often they were not headed up with a subject, they didn't have the tax reference number on them, and so on."

John Whiting, CIOT tax policy director and its representative, agreed that seeing how HMRC's postal centres worked had been helpful. "Talking to people at HMRC about what they had to deal with meant we can come up with basic suggestions for advisors as to how to head up post that goes to HMRC, and make it more likely that letters go to the right place rather than being delayed by being sent to the wrong place first."

Both Whiting and Aplin described the initiative as promising, noting victories such as resolving P35 penalty notifications and submission of returns by employers - plus the setting up of a single centre in Cardiff to deal with bereaved taxpayers, but were slightly concerned at how the initiative would continue once Clasper retired.

Aplin expressed hope that the new HMRC chairman would continue their good work with the same enthusiasm and commitment Clasper has shown.
HMRC said in a statement: "Considerable resource has been channelled into delivering the first of those objectives by 31 March, with work in hand for the remainder to be delivered by 30 June or 30 September ... the work has already delivered a change to the P35 penalty notification and in April a single point of contact for bereaved customers will be available in Cardiff. We are exploring ways to ensure post is delivered to its final destination more quickly and have launched an email pilot.

"HMRC is happy with the progress made and grateful for the involvement of the professional bodies who have helped us understand the customer perspective. We are now working to ensure that the changes made are communicated as widely as possible so that maximum benefit can be gained from them."

The steering group meets again on 19 April to review the progress made so far and discuss what will be done going forward. Whiting said: "There's been a number of appeals and requests for the profession to get involved, but if people have any specific queries about any of the areas that have been covered that they want us to bring up with HMRC, they are more than welcome to drop us an email - we're trying to keep members posted on what happens and get a healthy dialogue going."

It remains to be seen what happens next, but so far the initiative has been greeted very positively by all. "Just seeing a process fr om the opposite end gives you a different view, and is really helpful," Aplin said.

"I think initiatives like this mean we can design better processes, save HMRC money and save the profession stress."