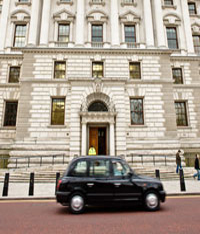 The general public are paying more tax than some millionaires as the Treasury reveals a breakdown of the UK’s richest tax records.

The list, published by the Treasury for the first time, reveals 6% of individuals with an income of above £10m in 2010/11 paid less than 10% in tax, while at least a tenth of earners on £1m or higher had under 30% of their income taken by the taxman.

The figures showed that a minimum of 72% of the UK’s millionaires paid 40% or more, but that a proportion of the nation’s most wealthy individuals were paying a reduced tax rate than their earnings allowed them.

A Treasury spokesperson said: ‘There are currently millionaires paying a lower tax rate than ordinary taxpayers. This is the system we have at the moment, but the government is committed to making it fairer. We’re capping benefits and these figures clearly show why it’s fair to cap tax reliefs for the wealthy as well.’

The publication of the UK’s wealthiest tax records comes as the political storm over the government’s intention to cap tax relief on charitable donations shows no sign of slowing.