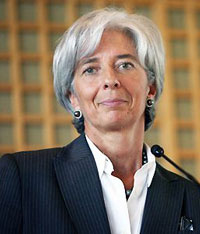 Christine Lagarde, who only last week denounced Greek voters over their taxpaying record - saying they were not ‘paying the price of being an EU member’ - has been made to eat a large slice of humble pie following revelations that she pays no tax on her huge salary.

The International Monetary Fund managing director was also forced to respond to angry Greeks who flooded her facebook account over the weekend, insulted by her previous remarks.

Posting a message on Saturday on her homepage on the social media site, Lagarde said: ‘As I have said many times before, I am very sympathetic to the Greek people and the challenges they are facing. That's why the IMF is supporting Greece in its endeavour to overcome the current crisis and return to the path of economic growth, jobs and stability. An important part of this effort is that everyone should carry their fair share of the burden, especially the most privileged and especially in terms of paying their taxes. That is the point I was emphasising when I spoke to the Guardian newspaper as part of a broader interview some time ago.’

The response has however been derided after it was revealed that her $467,940 (£300,000) annual salary and $83,760 of additional allowances are entirely tax-free because the IMF is an international organisation.

An IMF spokesman said: ‘Salaries, like those in most international organisations, are paid on a lower, net of tax basis to ensure equal pay for equal work regardless of nationality.’

He added that Lagarde did pay all local and property taxes, levied on her in the US and France.

Lagarde’s salary is greater than that of either prime minister David Cameron or president Barack Obama, both of whom also pay national taxes.