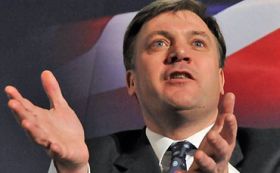 SHADOW CHANCELLOR Ed Balls has called for a temporary reversal of the increase in VAT and a one-year National Insurance tax break for small businesses taking on new staff.

Speaking at Labour's annual conference in Liverpool, he said the tax reductions are essential "to support the economy and create jobs here in Britain".

Balls won a standing ovation for a five-point plan to stimulate the economy.

The other key planks in his proposals to stimulate the economy are: repeat the bank bonus tax and use the proceeds to build 25,000 affordable homes and guarantee a job for 100,000 young people; bring forward long-term investment projects - schools, roads and transport - to get people back to work and strengthen the economy for the future; and an immediate one year cut in VAT to 5% on home improvements, repairs and maintenance to stimulate the housing market.

But he warned his plan to get the economy moving to raise revenue from growing income to pay down the deficit would not in itself secure Britain's economic future and warned delegates there would have to be tough choices on tax and spending involving discipline on public and private pay.

And he promised tough fiscal rules the next Labour government would have to comply with, monitored by the Office for Budget Responsibility.

He insisted the Lib Con coalition government's austerity measures "simply are not working" and are causing stagnation and increasing the deficit.