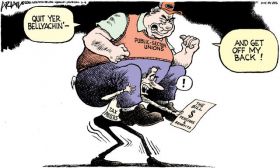 Every regular salaried person recognizes that federal tax is to be paid as they receive their salary. On the other hand, there can be problems for those who earn all or part of their income from other income streams. Tax is not withheld from the income of the retired investors, landlords and the freelancers but an ‘estimated tax penalty’ can be imposed on them. Accountants should seek to setup clients with income tax not withheld so that they pay the correct amount of taxes.

Generally non-withholding incomes are as follows:

· Sales of stock or other assets resulting in capital gains

· Earnings from a business

The US govt. requires the taxpayers in the above situations to pay their taxes by installments on 15th of April, June, September of the current year and 15th of January of the next tax year. Hence, January 15, 2015 is the next quarterly installment payment date for 2014.

If the tax liability is $1,000 or less then there will be no penalty. In other cases the penalties for underpayments will be the same as interest rate for other quarter-wise payments.

Taxpayers can avoid the estimated tax penalty if they comply with one of the following rules:

1. Pay 90% of tax liability of current year on estimation basis.

3. Pay 90% of the income resulted from annualization of current year’s income. The independent contractors earning seasonally can adopt this way of annualizing the income.

The rules seem flexible for the taxpayers and moreover, Uncle Sam is not fussy about paying taxes if you are paying timely.

Year end strategy: The taxpayers having tax withdrawn from their salaries may seek to increase their tax payments near to the yearend. For example when they earn more salary than the threshold of Social Security i.e. $117,000, their extra withholding tax payments can be allocated against the payroll tax savings. Hence, without decreasing the take-home salary, they are capable of complying with the tax rules.